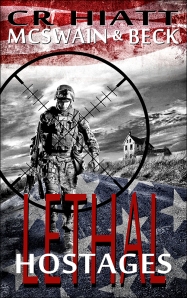 Jake Logan, Sydney McSwain’s father, was 18-years-old (the same age that she is now) when he chose to enlist in the military to serve his country. Before he turned twenty-five, he had been the recipient of medals for his heroic deeds and saving countless lives, and then recruited into covert ops.

On the day of Sydney’s birth, he was on a mission abroad, charged with the task of taking down a terrorist on the FBI and CIA’s most wanted list. When a raid on the compound went horribly wrong, members of the terrorist’s family deemed it their life mission to track down the covert ops unit, and issued an ‘Order of Death’ on their heads.

To keep his family safe, Sydney’s father disappeared from their lives, and years passed without any trouble.

After her mother died, Sydney found her father. Now, they were back together, trying to bond from the years of absence. Invited to attend a week of spy games, with Sydney and Cody (McSwain & Beck) learning the ropes of covert ops, the make-believe mission quickly turned into the real thing when Jake was lured into a trap, leaving the covert op trainees responsible for saving their lives.

But now that the terrorists knew of her identity, was Sydney the one they were after?