A moment of weakness…an afternoon of passion… A PERFECT SETUP 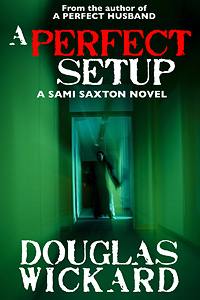 A moment of weakness…an afternoon of passion…

Sami’s back! And this time it’s personal!

The New York Times, Daily News and New York Post all hailed her a hero!

Samantha Saxton ‘owned the night,’ they reported. She was the victor, the quiet champion, the anti-heroine single-handedly destroying the career of a lethal serial killer stalking the tri-state area of New York, New Jersey and Pennsylvania for six unremitting years. The disappearance of six teenage girls and the horrific details of their deaths received national, frenzied attention and Sami Saxton became the unlikely poster woman in all the coverage.

Sami’s attempt to find a quieter, less hectic life by moving to a cabin her deceased father built years ago in the remote urban township of Montague, New Jersey didn’t turn out quite the way she’d planned.

But, that night continues to haunt her…in her dreams and in her life. The nightmares persist, vivid, ongoing and relentless. Posttraumatic stress syndrome paralyzes her, keeping her a prisoner in her newly renovated home. The anxiety attacks intensify and not even prescription painkillers can relieve the anguish.

Then, the unthinkable occurs. A young, female model is found brutally murdered in a midtown hotel. And, Jerry Saxton, Sami’s ex-husband, is taken into custody for the heinous crime.

I wrote my first short story when I was twelve. It was titled Twelve and a Junkie. I persuaded my sister Karen to ‘make it look professional’ so I could submit it to the Reader’s Digest First Person’s Award. Ada, my mother, was mortified. Can you imagine? Small-town boys from Ohio, growing up in the 60’s, hopefully, knew little about heroin addiction, or for that matter writing, but for me that experience opened a whole new arena of visual communication.

I didn’t win the competition, needless to say, but I did uncover a link between my imagination and the written word. If I was willing to show up, sit down and spend some time alone, a story quite possibly could develop.

I left home early, at sixteen, and joined the military. By twenty-three I was a world traveler. I traded in my small-town upbringing for the City; Los Angeles first, then New York. For over twenty years I lived in the Big Apple, working in the hospitality industry, but I never stopped putting pencil to paper, fingers to keyboard. My introduction to professional writing began with musicals. My first optioned show was called Waiting. Head Over Heels and Lovers & Liars followed. Although Broadway was the goal, my shows never saw the light of the ‘Great White Way.’ But, my association and collaboration, at that time, with so many wonderful, talented musicians, singers and writers was a creative dream, a children’s playground.

Several screenplays, a few novels and even a television script were developed, sent out and shelved. Some work gathered more attention than others.

Patience is the key in a writer’s life.

My first published novel, A Perfect Husband, introduces Sami Saxton, a normal forty-something year old woman dealing with challenges; a bad marriage, a tarnished career, a mid-life crisis (what else is new?). A simple plan to escape from her past and begin anew comes to a terrifying halt when a series of events catapult her into a battle for territory, self-preservation and ultimately her Life.