Gone at Zero Hundred 00:00 and Fireworks on the 4th, both Amazon bestsellers in YA mystery-thrillers, are on sale for 99cents starting April 26 and ending at midnight on April 28. Get your copies now; then get ready for the third book in the series, Lethal Hostages, coming soon!

“High-octane, action-packed and quick-witted romp through the perilous underworld. Written in a vein similar to early James Patterson (his good stuff) the chapters are short and make you want to gobble them down.” ~ Goodreads Reviewer

“CR Hiatt weaves a complex tale of intrigue and suspense that grabbed me right away and never let go, right up to the climactic end” ~ Goodreads Reviewer 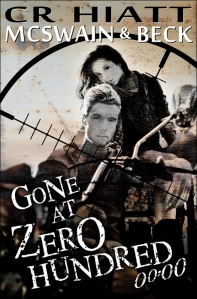 Detective Carter crept up the hills above an exclusive mansion keeping in the shadows to stay out of sight. One hand was firmly clasped around the 9mm Glock clipped at his hip. The other held the end of a Pelican LED police-issued flashlight which he used to guide his way. He followed the footprints noticeable in the mulch, size seven and ten if he had to take a guess. Sloppy for would-be prowlers looking to rob the place, or crazed killers carrying large weapons—at least that was the description given by the frantic woman when she phoned police dispatch after she spotted suspicious activity in the hills while she was jogging.

Hearing the sound, Carter whipped out his gun and waived his flashlight over the area. He noticed a camera perched on a tripod, peeking out through a row of bushes that was pointed toward a window on the second floor of the mansion.

A camera, that’s the large weapon the caller complained about?

“Ready, and action!” he heard a male voice say.

“Sutter Beach Police!” Carter moved the flashlight toward the voice; then pushed his way through a set of bushes to get a look. He shook his head at what he saw.

“McSwain & Beck, I should have known.” He put his gun back in the holster, and watched with an amused look on his face.

Cody was squatting down in the brush behind the camera, filming. He was painted in camouflage to blend in with the brush, and wore an ear piece with a built-in microphone.

He spoke into the mic. “Looking for two hotshot sleuths?” He veered the lens of the camera toward a set of branches high up on a tree.

That’s where I was, decked out in black Under Armour tights and a long-sleeve athletic shirt, with a ski-mask to hide my face. I was dangling upside down like a bat by a rope I affixed to the tree. I had my own camera zoomed in, and filming the escapades taking place inside the window of the mansion. After I got the footage I was looking for, I yanked on the rope, pulled myself upright and slithered back down.

Cody kept the camera on me until I hit the ground. Then, we posed in front of the camera with my face still hidden behind the mask.

Cody said into the camera, “Have a cheating spouse? Looking for a runaway teen? Need to verify facts, gather information, or have an employee take off with your funds?”

I added, “Or maybe you just need good old-fashioned surveillance services performed? No job is too big, or too small. Look no further, McSwain & Beck, the reluctant sleuths are here for you…”

An excerpt of Fireworks on the 4th: 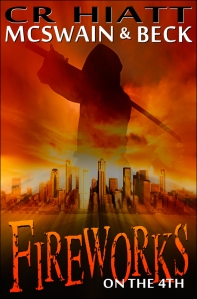 Every minute was becoming a blur for Jaden. It was like being in the middle of a nightmare, only he couldn’t seem to wake up. After being questioned by Seth Bauer, he knew he wasn’t getting out anytime soon, and that he was being moved to a new location. The only positive news was that Syd and Cody were looking into it. That gave him hope. He knew they wouldn’t let up until he was home.

When the thug with the slash across his face waltzed into the room wearing an eerie smile, Jaden knew it was time…he was going to hell.

He was thrown into the back of a beat up truck with guards carrying AK-47s, and leather whips. By the looks and physical gestures they gave him, he knew he was in danger. He was an American in Mexico. He assumed some of them were gang members, or associates of cartels. The back of the vehicle slid shut, and the truck ambled down the road.

After a long, and excruciatingly hot and bumpy ride, the vehicle came to a stop. The back door slid open, and Carlos greeted him at the door.

Jaden learned Spanish in school. He knew exactly what they were saying: “Welcome to the Death Camp!”

Another guard ordered him out of the vehicle. When he hesitated, he was met with a crack of the whip. He shuffled out the door. That’s when he got a look at his new hell. It wasn’t like any prison he had ever imagined. It was a large block of dilapidated sandstone with few windows, surrounded by a barbed wire fence, and patrolled by two armed guards. Beyond that it was miles and miles of desert sand. If he tried to escape, he would possibly die, and his skeletal remains wouldn’t be found for years. That is if the creatures of the desert left anything to find.

It had been a long time since Jaden had actually prayed, but he found himself silently pleading and begging for his life. There was still so much he wanted to do. “Please don’t let me die in this horrible place,” he said to himself.

The sound of a gunshot brought his attention back to Carlos who was dangerously waving the weapon in the air. They ordered him to put on a blindfold then he was ushered through the gate, and into the compound prison. They led him across several feet of open space, up a flight of stairs and then tossed him into a confined space. As they slammed the door behind him, he removed his blindfold.

He looked around his new dwelling, noticing all the little creatures that scurried along the floor. The walls and floors were concrete, the color of ash. It looked like the place had gone up in smoke, but was somehow left standing. The only way to go to the bathroom was by squatting over a hole in the floor.

For more info on CR HIATT:

One thought on “McSwain & Beck series on #SALE for #99CENTS”